After yesterday’s post about issues of integrity in the yoga industry, I was lucky enough to have someone share an article from the New York Times that reflects on a similar issue among writers, and that is equally relevant to all of us who provide services that are lumped into the category of “creative,” and also equally relevant to those who practice healing arts.  As much as I loathe the message these articles bring – that our culture has a serious illness connected to sacred reciprocity – I am thankful that they are starting to filter into my awareness.  This has been a big topic for me recently, and one that I have felt VERY strongly called to bring into the public eye in new ways.

Part of my creative work is creating and sharing mantra music in concert.  As someone who has been training and working as a musician for very close to thirty years now, and 25 of those as a full time professional, I know that my work and artistry are of value.  For nearly 20 of those years, I worked as a respected classical musician and was quite well paid for my work as a concert artist and teacher.  As my path transitioned from high art music to the world of bhakti yoga – which is the branch of yoga that is connected to mantras and chanting – I was shocked to encounter so much imbalance in the culture and belief systems.  I was met over and over by the belief that working within this genre was something that I should freely offer because it’s connected to spirituality, and if I happened to receive some donations, I should take it and be happy.  The rest of this story is one I’m going to save for another day and a much longer post.  But needless to say, my heart is very much devoted to sustainability for ALL artists and healers – I firmly believe that we ALL should stand in solidarity and refuse to accept any empty offers of “exposure” as payment, and insist to those who are ignorant, disrespectful, and just downright clueless that our work, too, is worthy of fair pay.

And so, I share with you this great article from the New York Times.  Enjoy!!  ~ Angela Blueskies

Slaves of the Internet, Unite!

NOT long ago, I received, in a single week, three (3) invitations to write an original piece for publication or give a prepared speech in exchange for no ($0.00) money. As with stinkbugs, it’s not any one instance of this request but their sheer number and relentlessness that make them so tiresome. It also makes composing a polite response a heroic exercise in restraint.

People who would consider it a bizarre breach of conduct to expect anyone to give them a haircut or a can of soda at no cost will ask you, with a straight face and a clear conscience, whether you wouldn’t be willing to write an essay or draw an illustration for them for nothing. They often start by telling you how muc 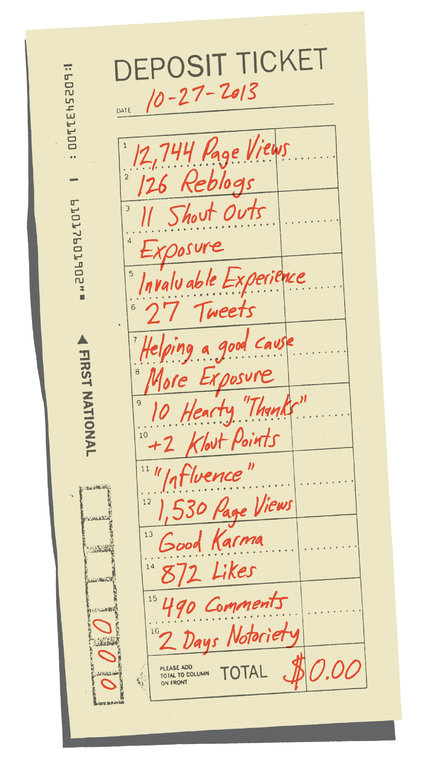 h they admire your work, although not enough, evidently, to pay one cent for it. “Unfortunately we don’t have the budget to offer compensation to our contributors…” is how the pertinent line usually starts. But just as often, they simply omit any mention of payment.

A familiar figure in one’s 20s is the club owner or event promoter who explains to your band that they won’t be paying you in money, man, because you’re getting paid in the far more valuable currency of exposure. This same figure reappears over the years, like the devil, in different guises — with shorter hair, a better suit — as the editor of a Web site or magazine, dismissing the issue of payment as an irrelevant quibble and impressing upon you how many hits they get per day, how many eyeballs, what great exposure it’ll offer. “Artist Dies of Exposure” goes the rueful joke.

This is partly a side effect of our information economy, in which “paying for things” is a quaint, discredited old 20th-century custom, like calling people after having sex with them. The first time I ever heard the word “content” used in its current context, I understood that all my artist friends and I — henceforth, “content providers” — were essentially extinct. This contemptuous coinage is predicated on the assumption that it’s the delivery system that matters, relegating what used to be called “art” — writing, music, film, photography, illustration — to the status of filler, stuff to stick between banner ads… to continue reading, please click HERE!!!

And to enjoy some of Angela Blueskies’ music, please click HERE!!!