Skip to content
What is a woman? An object of desire, a body that lends presence to a daydream, a fantasy of 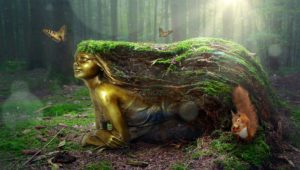 unspeakable pleasure? A fragrance, a glance, a soft touch, curves and shadows, seductive and alluring, calling the ancient memory of something just out of memory’s reach?
What is a woman? A nurturing and caring mother, drying the tears, caressing the ache, whispering sweet comforts into the ears of those whose tender places are filled with pain and sorrow, saying that all will be well and fine?
What is a woman? Once a princess with a fairy wand and crown, caught in the sparkle and magic of what would be possible if all life’s cares and worries were ushered away in the protective care of the right man, the right family, provided for in every way by unimaginable wealth and luxury?
What is a woman? The child in a clean dress and shiny shoes, bows in her hair, taught to smile and stand just right, speak softly, and not attract too much attention for anything other than being adorable, like a little doll?
What is a woman? The one who listens quietly and nods, agreeing with her husband, encouraging him, lifting him up, and making sure his needs are met, never speaking of her own, always the good wife and caretaker?
What is a woman? The teenager, struggling to stand in a changing body, pretending not to notice the overt and awkward glares of boys staring at her breasts, her ass, discovering the power in capturing that gaze, or hoping to hide herself enough to avoid it altogether?
What is a woman? Someone who must consider her hairstyle, her wardrobe, her makeup, her shoes, and her style in order to attract just enough of the right kind of attention to succeed in her work, but not too sexy, and not too powerful, for we all know that a woman that’s too sexy isn’t taken seriously, and a woman that’s too powerful is a threat?
What is a woman? A voice that speaks loudly and clearly about her passions, desiring to make great change, and who is mocked, chided, harrassed, belittled, judged, threatened, criticized, hated, ridiculed, and sometimes killed for taking her stand alongside similar voices of men, who are celebrated for the same?
What is a woman? One who only succeeds through surrendering her body to birth, and who fails in her existence when babies are not possible or not wanted? While at the same time being judged and tossed aside for choosing the path of creating a family alongside professional endeavors? Who simply cannot win no matter her choice?
What is a woman? A tease, a whore, a hooker, a slut? A prude, a frump, an old maid? One whose body is oversexualized by men who fantasy fuck her in the privacy of their own armchair, and whose actual sexual freedom is condemned as perverse when claimed and fully expressed? One whose body is tossed aside by men who find no sexual pleasure in her image, for her body is too big or too small, her style is too uninteresting, and her presence has no interest in capturing the attention of men?
What is a woman? A bitch, a mad dog, a man-hater, a feminist, whose desire to stand in her own power is a threat to centuries ~ millenia even ~ of men who have known their proper place in the natural order of things? A brilliant mind that has no interest in the approval or acceptance of anyone outside herself, and especially not from men who cannot understand a woman who doesn’t need to be validated or justified by them?
What is a woman? One who knows her own mind and heart in the great order of things, who can still hear the deeper voice of Spirit and the natural world, and whose answers come from within, needing no confirmation from outside her own knowing?
What is a woman? A fierce goddess who takes no shit, who speaks her mind, who fearlessly calls for justice and truth, happy to demolish all that must be destroyed in order for greater good to come?
What is a woman? The gateway of life and death, one foot in each world, dirty feet from walking the fields, and bright eyes from seeing what is beyond, hands in the messy, wildness of the womb of creation and in the chalky ash of the sacred fire?
What is a woman?
What is a woman?
What is a Woman?